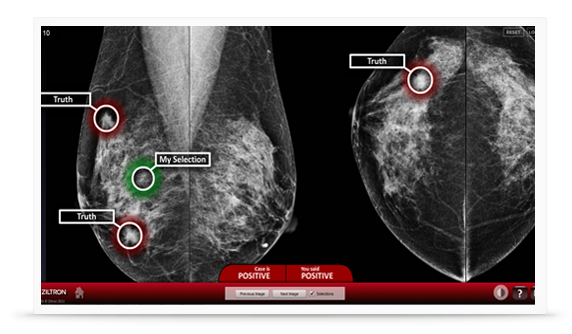 The International Cancer Screening Network are working with Ziltron in designing and deploying an International Mammography Test-set to be used for quality assurance and educational purposes. The project is funded by the American Cancer Society.

The International Cancer Screening Network (ICSN) is a voluntary consortium of countries that have active population-based cancer screening programs and active efforts to evaluate and improve the processes and outcomes from cancer screening in practice. The ICSN includes efforts to evaluate cancer screening for a number of cancers where screening has been demonstrated to be effective, including breast, colorectal, cervical, and lung. These programs can be national or subnational in scope, and established or pilot-based. Administered by the Applied Research Program of the US National Cancer Institute, the consortium was established in December 1988 as the International Breast Cancer Screening Database Project during an international workshop involving representatives from 11 countries. The consortium has since grown to encompass 33 countries, and holds biennial meetings. In the interim, the specific activities are moved forward through working groups.

The International Test Sets interest group was formed in 2010 for the purpose of sharing knowledge about creation and use of test sets for measuring performance of radiologists in mammography screening. Out of this meeting came a project to develop one or more test sets that could compare interpretation ability internationally and also be used for local evaluation and education.

The group met at the American Cancer Society in Atlanta 2012, where Dr. John Ryan (Ziltron CEO) presented the various options for test-set creation and how Ziltron's software could be utilised for International deployment.

Dr. Ryan states, "We are delighted to be working with such an accomplished group on such an important project. We're very much looking forward to the full realisation of this innovative International program"